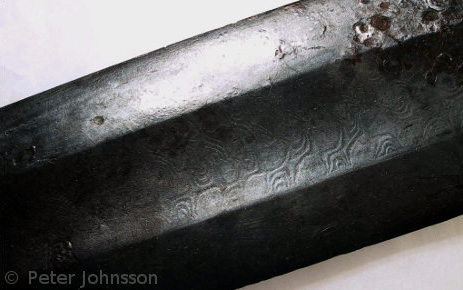 Pattern welded steel or Damascus steel is a technique that has been used for more than a thousand years. It is believed to have been independently developed by different civilizations around the world.

Metalworking has a long history in Sweden and the Vikings were among the first cultures to develop a pattern welding technique to make their swords superior to others.

The processing techniques developed during this time in Scandinavia improved the tool making as well as the iron culture in the world. The hot forging of the sword steels and quenching it to hold the martensite structure (hardened) was the main technique in achieving the superior qualities of the sword. The layering of two different steel types created an early composite material and the Viking swords could be made both longer and sharper. It is said that the Vikings quenched the forged swords in beer and even read the fortunes of the lines that were formed. The sword was not just an instrument of war. It represented national as well as individual pride, protection of the nearest, honor, and above all it was a symbol of heroism.

Another result of pattern-welded steel is that a nice pattern appears in the steel, when slightly etched in acid, or when the patina of using it a long time shows on the surface of the steel. The picture shows a genuine Viking sword dated from the 10th century.

The hand-forged damascus steel in GoS watches was forged by Johan Gustafsson until 2021 when Swedish master bladesmith Conny Persson joined the GoS team. Both artisans use modern Swedish tool steels, which are renowned for their superior qualities. Johan has reinvented the ancient techniques in his smithy and has developed new techniques and patterns that are his unimitable trademarks. To date, Conny has received a total of 11 awards across the eight years he was actively exhibiting, before he decided to spend more time at home with his family. Conny received the second chair in the Swedish Knife Association's Hall Of Fame in 2008 with the following motivation: "He is a true pioneer in damascus steel forging which, with his accuracy and feeling for steel, has led the development of Swedish forging forward to today's top international position."

There have been several interviews with Patrik and Johan published in high profile media and one that discussed steel making with Johan in greater detail was published in Forbes Magazine back in 2013: Making damascus steel and timepieces. New York Times published an extensive interview and photo feature in March 2017: Swedish Watches Show Signs of Viking Past and Stellar Future.

No corrosion on GoS damascus steel

One question we often get is based on the misconception that all Damascus steel rust. GoS use stainless damascus steel on all exterior parts, so there will be absolutely no corrosion there. The damascus steel parts for the dial and movement are made from high quality Swedish tool steels, which makes them less inclined to develop corrosion than some other damascus steel. The surface treatments applied by GoS team members, e.g. polishing, etching and tempered coloring also act as an effective corrosion seal. The tempered coloring method is a very powerful method to prevent corrosion.

The GoS damascus steel watch cases are specified to resist at least 5ATM with a double gasket crown to further eliminate any risk for corrosion within the watch. This ensures that the damascus steel parts, as well as the other "normal" movement parts in similar steel (e.g. the winding mechanism) are never exposed to moisture.

The first GoS damascus steel movement prototype has never been protected in a waterproof case when it has traveled with Patrik Sjögren to several shows and customer visits worldwide during many years. It still shows no signs of corrosion whatsoever, even though it has not been kept within a sealed case. This makes us fully confident that any risk of corrosion is negligible and we therefore extend the guarantee for corrosion issues to 10 years. In fact, the movement parts in steel would rust more severely should the watch be subject to water damage. However, it is always possible to restore the watch should the worst happen.